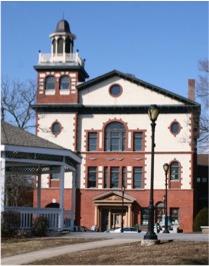 The gracefully sweeping balconies, fine examples of bottle glass, keystone arches, and intricate wrought iron work that adorn the Sterling Opera House have beckoned photographers from all over the world.  Their images tell a story of masterful design and fine craftsmanship.

Named after Charles Sterling, a renowned piano manufacturer in Derby, the theater opened on April 2, 1889.  Located across from the historic green on Elizabeth Street in downtown Derby, its style is largely Italianate Victorian, very unusual for a public building.

The theater featured a large auditorium with a striking proscenium arch framing the stage.  The seating arrangement was influenced by German Composer Richard Wagner, whose conception of a triangular layout enabled all theatergoers to enjoy unobstructed views of the stage.  Its acoustics rivaled those of New York City’s Metropolitan Opera House; even a whisper could be heard at the back of the theater.

Beyond its brick and mortar, the Sterling tells stories of great social, economic, and historic value.

From 1889 to 1945, the Sterling Opera House was an entertainment mecca for vaudeville legends, internationally renowned figures, and theater premiers. 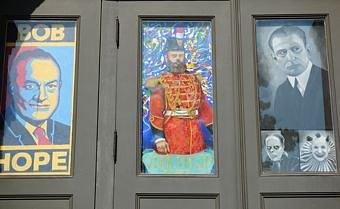 D.W. Griffith, renowned silent filmmaker, chose to premiere many of his film productions at the Sterling after a delightful reception to his film, Birth of a Nation.

George Burns, Gracie Allen, Milton Berle, Bob Hope, and Bing Crosby were among the many other stars that graced the stage during the theater’s heyday.

The Sterling’s place in history is marked not only by its reputation as a renowned entertainment venue, but also by its role as a civic meetinghouse.

For example, at the end of the 19 th century, a large group of women walked off their jobs at the local Paugussett Mill, a reflection of the labor unrest that existed in the area at the time.  It took fifty-four days and a personal visit from the famed AFL president, Samuel Gompers, to end the strike.  The settlement was announced to a packed room at the Sterling.

The theater’s story can also be told through its unprecedented achievements.

The first national convention of the Purple Heart Association was held at the Sterling, opening with over 60 delegates from as far away as California.  It was also the first structure in Connecticut to be listed on the National Register of Historic Places.

The Sterling operated as a theater until 1945, at which time its lower levels remained in use as Derby’s City Hall, police station, and local jail.  It was a bustling center of municipal activity until its abandonment in 1965.

The Sterling Opera House is not currently open to the public.