Earlier this year (see story below), the WPCA hired Edward Abel to be Acting Superintendent at the WPCA. We are very pleased to announce that the “acting” part of the title has been removed and Edd is now officially the Superintendent at the WPCA. In the months since his appointment, Edd has done an excellent job in better organizing the plant and staff to deal with the many issues facing WPCA related to the consent orders under which the city is operating and managing the capital projects approved in the 2014 referendum. He has also attained Level 4 certification from the State of Connecticut. On top of that, he has been named to the Wastewater Operators Certification Advisory Committee for the CT Department of Energy and Environmental Protection where he will share his expertise in helping DEEP with issues related to the testing, certification, and qualifications of wastewater operators. Congratulations Edd.

The WPCA is also pleased to announce the appointment of Kevin Shlatz as Laboratory Director for the City of Derby filling the position that became vacant when Edd Abel was named Acting Superintendent. Kevin started out in the wastewater field after graduating from Springfield Technical Community College in Massachusetts with an Associates in Civil Engineering and Environmental Engineering Technologies in 2000.  His wastewater career started in 1999 working for the Town of Windsor Locks Water Pollution Control Facility as an intern.

Through the last 19 years, Kevin has worked at 5 different wastewater treatment plants in various sizes. Kevin started as an operator and worked his way up to shift supervisor and spent

the past 8 years as superintendent. In 2011, Kevin earned his Class IV State of Connecticut Wastewater Treatment licenses. Along with his operator’s license he also holds a Class IV collection system license and a Laboratory Analyst 1 license from New England Water Environmental Association. Kevin is also one of the initial graduates of the Connecticut Water Pollution Control Abatement Association’s Wastewater Management training.

In his free time, he spends time with his family. He co-leads one of his daughters Girl Scout troop and is currently going back to school to finish his bachelor’s degree in project management. Welcome Kevin. 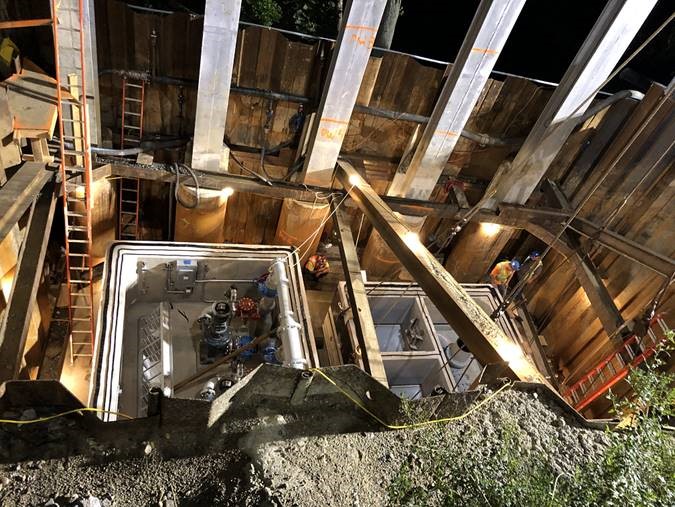 The WPCA continues to make progress on capital items included in the $31.2 million referendum passed by voters in 2014. In 2018 Pump Stations on South Division Street and Burtville were completed and work on the very complex and much larger pump station on Roosevelt Drive was begun. Holzner Construction is the firm building the facility that is costing over $7,000,000. Throughout 2018 they completed site clearance and they have built permanent sheeting on the river side.  This spring they completed the drilling of caissons and began construction of the deep excavation needed for the installation of the pumping station and wetwell.  These structures have been built offsite by United Concrete in Wallingford and were delivered and installed on the site beginning Friday August 16th 2019. The project is slated for completion in November 2019.

Design work is also continuing by DeCarlo & Doll on the improvements along Rt. 34. In an effort to save on expenses and improve the project, the work is being done in conjunction with the coming improvements to RT. 34 being done by the CT Department of Transportation. The state expects to go out to bid on the project in April 2020 and WPCA work will coincide with that project.

Derby CT FOG Residential Brochure(1).pdf
What residents can do with Fats, Oils & Grease at home

TO MAKE A PAYMENT ONLINE CLICK HERE
***PLEASE NOTE A CONVENIENCE FEE WHICH IS A BANK FEE, WILL BE INCLUDED ON EACH CREDIT CARD TRANSACTION*** 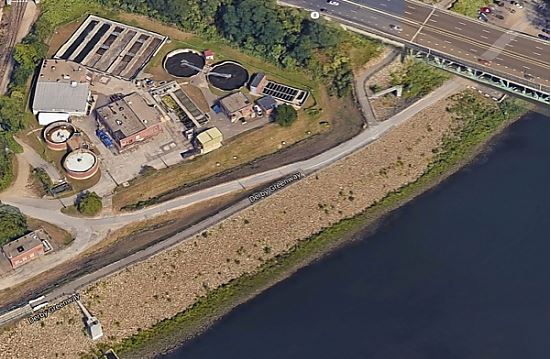 Description : The Derby Water Pollution Control Authority (WPCA) is responsible for the city’s waste water collection and treatment. The system contains over 40 miles of sewers with 75% of those pipes constructed prior to 1970. The system also includes 4 pump stations owned and operated by the WPCA. Those stations are located at Patty Ann Terrace, South Division Street, Burtville Avenue and Roosevelt Drive. All wastewater flows into the main treatment facility at 1 Caroline Street.

Governance : The WPCA is governed by an authority composed of five members appointed by the mayor and approved by the board of aldermen to serve five year terms. No more than 3 members may be from the same political party. The current members are Jack Walsh (Chair), Kelly Curtis, Robert Miani and Rose Marie Pertoso. The operations of the WPCA are subject to regulations from the U.S. Environmental Protection Agency (EPA) and the Connecticut Department of Energy and Environment (DEEP).

Funding : The WPCA receives its funding through fees from users of the system. Users pay a flat fee for their connection as well as a fee based on usage. The usage is reported to the WPCA from the water company. These fees are computed annually, and bills are                mailed in the fall. Consumers may pay in two installments. Starting with the bills issued in fall, 2018 users are being assessed an annual    “capital fee” to cover the costs of the capital improvements being made as part of the 2014 referendum. That cost will be approximately      $257 per unit and will be billed annually until the entire referendum costs are paid, which is expected to be at least 20 years. 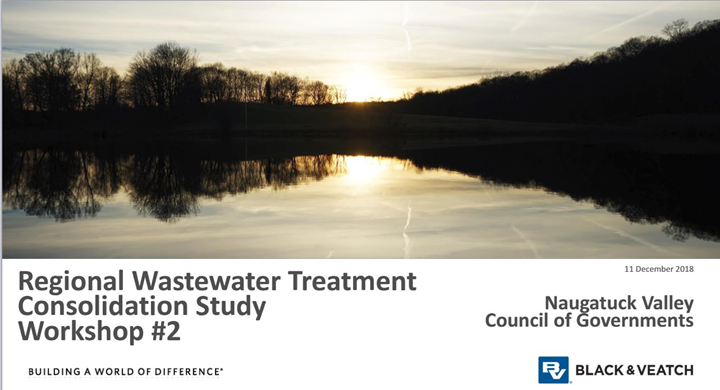 Derby WPCA is also participating in a Regional Wastewater Treatment Consolidation Study along with Ansonia, Seymour, Beacon Falls and Naugatuck to study the feasibility of any possible collaborations/consolidations among the cities that could be beneficial. The $1.35 million study is funded by the State of Connecticut Office of Policy and Management (OPM) and administered by the Naugatuck Valley Council of Governments.

Phase 1 of the study has been completed. That part of the study analyzed conditions and capacities at facilities in all of the towns involved and also came up with a list of potential alternatives for regionalization. All of the information developed to date can be found on the Naugatuck Valley Council of Government’s website and you can access it at https://nvcogct.org/content/regional-wastewater-treatment-consolidation-study.

Phase I clearly identifies the poor conditions of Derby’s physical plant that were the basis for the passage of the 2014 referendum. Phase II of the study will hopefully narrow down the list of alternatives to those that are not only feasible, but also cost effective. Work on the physical plant in Derby has been on hold since the study was begun, but WPCA is now investigating options to alleviate some of the issues originally identified that could also be useful if and when a regional alternative is developed.

WPCA is working on a comprehensive Infiltration / Inflow (I/I) Control Plan, in accordance with an EPA Clean Water Act Consent Order, to help reduce the amount of clean water entering our sanitary sewers.  This excess water puts an unnecessary burden on our treatment system and removing it helps our treatment plant to run much more efficiently. We have previously conducted an extensive Sanitary Sewer Evaluation Survey to identify and quantify these sources of clean water entering our sewer system and have embarked on a multi-year plan to begin implementing the necessary repairs to the sewers to remove this excess water from the sanitary sewer system.  During 2019, as part of Phases 1 and 2, the WPCA installed liners in the existing sanitary sewers in the following areas:  Cedric Ave, David Humphries Road, Hawthorne Ave, Hawkins Street, Mohawk Ave, Pershing Drive, Pleasant View Road, Seymour Ave, Turner Ave.

WPCA will now develop plans for work on Phase 3 which will take place in 2020. We will post those plans here when completed.

Fats, Oils, & Grease Pretreatment Regulations Adopted 3-15-2017
REGULATIONS FOR THE INSTALLATION AND CONNECTION OF BUILDING SEWERS AND FOR THE USE OF PUBLIC SEWERS IN THE CITY OF DERBY
APPLICATION FOR NEW SEWER CONNECTION, SEWER REPAIR OR DISCONNECT
CONTRACTORS REGISTRATION FORM
FOG (FATS.OILS & GREASE) PROGRAM INSPECTION

The City of Derby sanitary sewer system provides service to over 12,000 customers and contains over 216,000 linear feet of pipe. The wastewater is transported to and treated at the Derby Water Pollution Control Facility (WPCF). If the capacity of the sewer system is exceeded or if blockages occur, overflows may result. Untreated wastewater overflows that occur upstream of the WPCF are called Sanitary Sewer Overflows (SSOs). SSOs are a threat to public health and the environment because the SSO may discharge pollutants such as pathogens, floatable materials, toxics and other pollutants, all of which may impact public health, drinking water supplies, water quality, and/or aquatic ecosystems.

The City of Derby WPCA's goal is to document and prevent (or mitigate) overflows whenever possible, to deal efficiently with the effects of such events, and to protect public health, environment, and property. While the City's collection system is old and prone to failures, a quick response and an aggressive maintenance and replacement plan will minimize the impacts.

The City of Derby WPCA is required to report all sewage overflows to the Connecticut Department of Energy and Environmental Protection (DEEP).  Any overflows that reach a local waterbody are listed on DEEP's website:

The City of Derby WPCA also lists SSO's that have occurred in Derby below: ​ 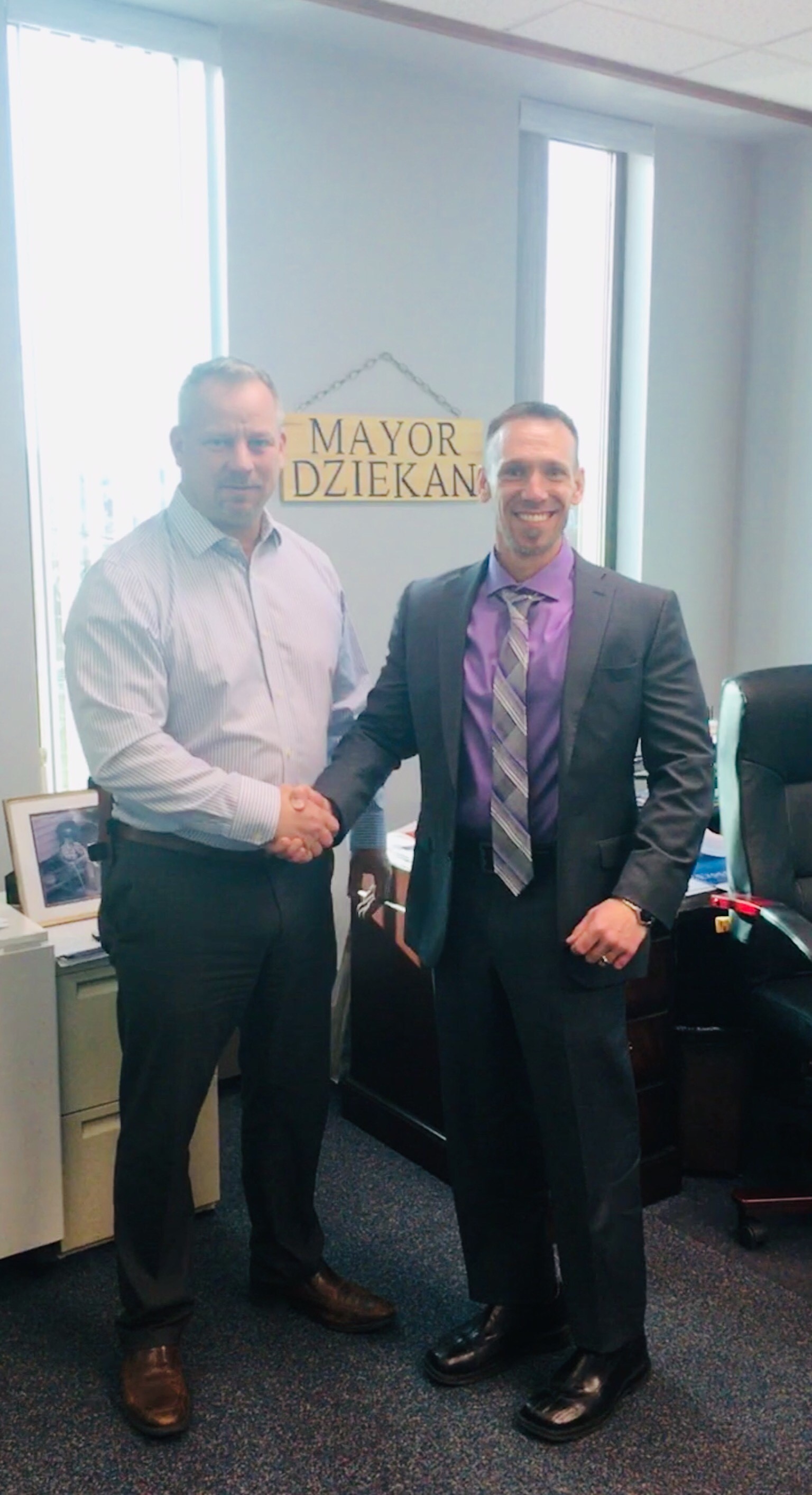 Mayor Richard Dziekan has announced that Edward Abel has been appointed as Acting Supervisor of the Derby Water Pollution Control Authority following the resignation of Lindsay King who had served the Authority for 23 years. He said, “Lindsay had an outstanding opportunity for advancement that was good for him and his family. We thank him for his leadership and years of service to Derby and wish him well in his new position.”

Edward Abel who has been managing the laboratory at the plant will be stepping into the Acting Supervisor position. WPCA chairman Jack Walsh said that the Authority was very fortunate to have Abel take on the Acting Supervisor position. He said, “In the short time that Edd has been in the position, he has transformed the lab making it more efficient and saving us thousands of dollars based on the new practices that he has put in place. We’re grateful for the years of service that Lindsay provided and excited about the skills that Edd brings to us during a period of major challenges and opportunities for WPCA.”

Abel came to Derby after seven years in Milford and Stamford where he steadily rose through the ranks including earning a Class III Operator license which is required to run the Derby plant.

Derby WPCA is in the midst of major changes prompted by the passage of a $31.2 million dollar referendum in 2014 to upgrade the Derby plant and system. To date, the Authority has completed new pump stations at South Division Street and Burtvillie and is in the midst of building a new station on Roosevelt Drive that will be completed by June of next year. It has also been working on an ongoing plan to reduce water infiltration to the system by repairing and replacing pipe in the system. A major part of that work is involved in the upcoming reconstruction of Main Street.

The Naugatuck Valley Council of Governments is also about half way through a regional study that could have a major impact on the future of the plant on Caroline Street.